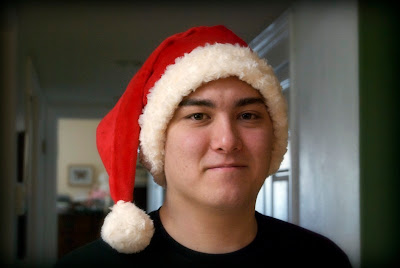 This was one of those quick-and-easy projects that somehow gets out of hand, like when you think you might quickly scoot the bookcase to the other side of the room but first have to remove the books, of course, and 4 hours later find yourself reorganizing your entire library, making 8 separate bags for all the places and people you plant to pass some of the extras to. And then, since the bookcase is now empty, you realize you may as well sand it down and paint it the color you'd always planned…but um, now the curtains clash with the new color and must be replaced.

Does this ever happen to you? Please tell me it does.

C has a large head which can't fit into any of our Santa hats. He asked me to make him one, and I agreed. An hourlong project, I figured.

The fabric store didn't have the red fur he requested, but it did have all its "soft and fluffy fabrics" (yes, I believe that is the tailor's term) discounted 50%. So I brought some home and started cutting.

Then I noticed that the red fabric was kind of floppy. I thought I might add a little something to give it heft and spied some leftover cotton batting on the sewing shelf. And then I realized that C, once one of those children who was seriously disturbed by seams, was even at 18 not going to like having a bulky one touching his head. I decided to make the batting into a lining. (Why at this point I didn't switch to a more suitable fabric is beyond me. I blame my fuzzy, congested head.)

I had also neglected to get a pom-pom and realized that none of the white yarn I had was going to work with the creamy, textured fur of the brim. Thank goodness for the internet.

The entire project ended up being only mildly more involved than sewing the fur-trimmed cone I'd originally envisioned; but you know how it is when you're revising the project along the way instead of planning it well in the first place. Maybe you run into the dinner hour, have to clear everything from the kitchen table and set it up again after the dishes are done…and perhaps the son who wanted the hat also decides he needs his long hair shaved down to stubs that very night—10 pm!—and since the last time you shaved his head was 9 years ago, the clippers are rusty and an impromptu trip to town must be made for a new pair. And it turns out you've forgotten how to use clippers, anyway, so must make several ungainly passes before you get the hang of it.

This is how a one-hour project ends up lasting till midnight.

But maybe you can learn from my ineptitude and make your Santa hat in 30 minutes—it really shouldn't take much longer than that. Below is exactly how I made it, with notes of what I'd do differently next time in italics:

Red cap fabric 2/3 yard
White trim fabric 1/4 yard
lining fabric, same as red cap fabric
(note: in retrospect, I think 1/2 yd of red is plenty for most hats. C has that large diameter head and I was going for proportion. And 1/4 yd of trim fabric felt a little tight—I might get 3/8 yd of that. It depends on your preference, of course. Also, while scrap batting worked fine for the lining, I regret that I didn't think to use a real fabric rather than what is essentially needle-punched cotton fluff.)
scissors
thread
stuffing for the pom-pom
(I used scrap fabric but would have preferred a lighter-weight polyester stuffing if I'd had it)
hot glue/glue gun

I used a machine, but this could easily be handsewn. Seams are arbitrarily 1/2" wide. Also, I apologize for my photos, which were taken in the poor artificial light of our house. As it got darker, the photo color became harsher and more contrasty, but I hope you can at least see the steps.

1. Measure your head. Remember to measure it both around the crown and as the hat will be worn (from the nape of the neck to the forehead) and choose the larger measurement. You can either use a measuring tape or the trim fabric itself. C's head measures 24" but when we wrapped the fur around to see what felt comfortable, he found he actually liked it being 26" around. 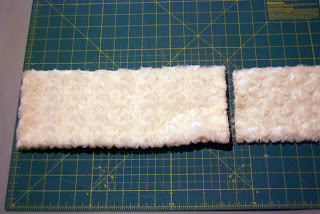 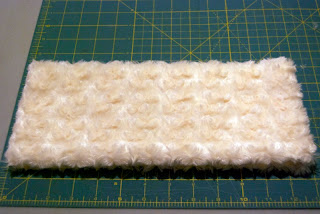 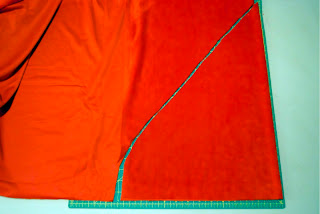 4.  Fold your red fabric in half with the selvedge running along the length, and cut a hat shape from your red fabric. The base should be the same width as your trim, and the height is roughly the height of your yardage, or whatever looks right. You can see I was just winging it here, but it only needs to sit on the head and flop over so anything pointy will work. I chose not to make a symmetrical cone in favor of maximizing the stretch of the knit. That means the hat opening runs perpendicular to the selvedge and the point runs off a little to the side (so that there is only one seam). If you are using a furry or napped fabric, as I was here, remember to run the nap in the direction you want it before cutting. 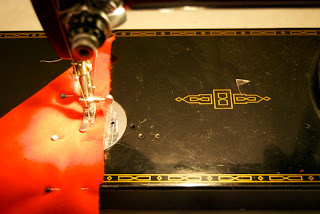 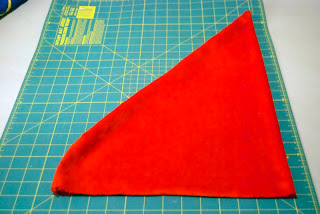 5. Fold with right sides together and stitch the cut edge closed. Pinning helps with a soft or slippery fabric. Turn right side out. 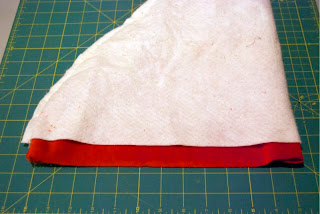 6. Cut and stitch the lining fabric the same as for the red cap. Next, with the lining wrong side out and the cap right side out, slip the cap into the lining, matching up the two seams. Right sides should be facing each other.
7. Stitch the opening of the cap closed, leaving a 2" gap to turn. Then pull the hat right side out. You'll end up with the lining opposite the cap. Just push it in, poke it gently from the inside with a knitting needle or chopstick to define the point, and iron if necessary. If you are a stickler, you can handstitch the opening closed again, but I didn't do this since it all gets caught up in the trim, anyway.
8. Attach the lining in the same way. With the hat red side out, and the trim folded side down, slip the trim into the hat and pin around the edges.

9. Now you will legitimately have 4 thicknesses of fabric to sew through. I set the machine to the maximum stitch length and lightened the pressure foot a little. And then sewed very slowly. If your foot gets caught in the fur, as mine sometimes did, just backstitch aways, smooth the fur down, and stitch forward again. 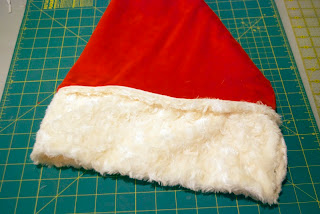 10. The raw seam will be on the outside of the hat, like so.
11. But when you fold the trim up, it will cover the seam. Sew it closed with a simple slipstitch. 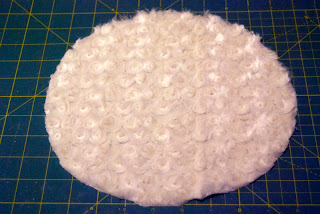 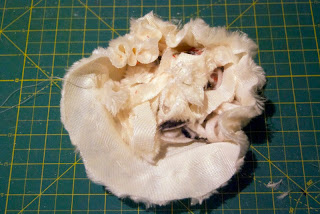 12. The pom-pom: in this wonderful age of idea sharing, I still feel strongly about attribution so want to point you to  this video where I found the ingenious way of making a pom-pom to match the brim. Just cut a circle of fabric (this shows 9", but I ended up cutting it down to 7"), take a running stitch along the perimeter, and draw it closed around the fill of your choice: chopped up fabric scraps, as shown in the video and which I used here, or (preferably) some kind of light polyfiber stuffing that you have sitting around. 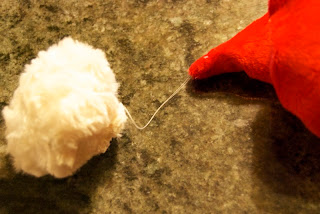 13. Trim down the ends of your gathered ball, and hot glue it to the point of the cap. I actually sewed the pom-pom to the cap before gluing it, as you can see above, using the gathering thread and taking the needle down through the point of the cap and lining. 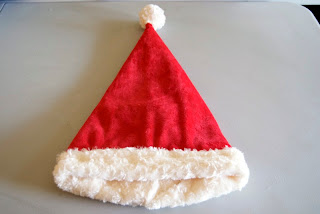 14. That's it. Here's the finished hat with the seam at the back. Now that I think about it, that shape works really well for the sloping line from forehead to back of head.

In any case, it fits C's big head and he loves it. And since he chose to remove his hair in the dead of winter, I'm doubly glad that the hat is lined and seamless.
Posted by unschool at 11:21 AM