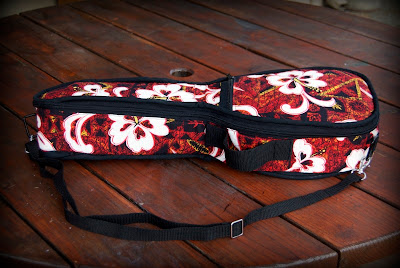 This bag was just short of being a disaster, but I'm putting it here, anyway, in recognition of all these projects that are springboards to better ones. I did learn something from it, and with luck the next bag will incorporate that learning. 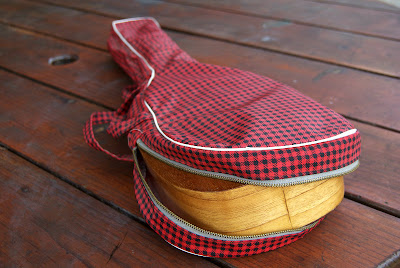 I never used the old bag: in addition to not fitting the Gaspar pineapple well, the metal teeth of the zipper drag across the wood whenever the uke goes in or out of the opening. Who thought this would be a good idea? So the starting point for this bag was a long zipper with nylon teeth. I used this Make-A-Zipper roll (no affiliate connection), which I'd originally bought for the Weekender.

The Weekender had also given me some experience using heavy-duty stabilizer and sewing on cording, both of which I adapted to this bag. I didn't take any photos, but the sequence was more-or-less as follows:
It sounds so straightforward, doesn't it? But in fact, I'm sure I redid nearly all the seams at least once. I was figuring the construction out as I went, stitching and restitching, trying to anticipate what the next step might be. It was a haphazard, messy process.

Halfway through, I felt like the stabilizer wasn't working well with the narrow neck shape, so cut up a sheet of flexible plastic to insert into the top and perimeter pieces.

Once I'd sewn the last seam and turned it right side out, I was dismayed to see how twisted the neck area looked. I ripped it out and restitched it several times before deciding that it was going to have to do. The neck is still twisted, sigh. I think it's probably due to my top and bottom pieces being entirely different shapes—and that is due to the fact that I didn't have a seam line at all, but was trying to sew to the shape of the stabilizer/foam outlines.
What would I do differently next time?

For starters, I would measure and mark much more than I did this one. I was afraid of miscalculating but in the end, probably erred worse in trying to sew by feel instead of having a precise line to follow. Each mismatched fit ended up compounding problems down the road.

And as mentioned in Step 1, a simplified shape would save a lot of headache.

The zippered pocket needs to be moved down several inches. It's really only useful for holding a set of spare strings, so a larger zipper opening would make it easier to slip them in or out. 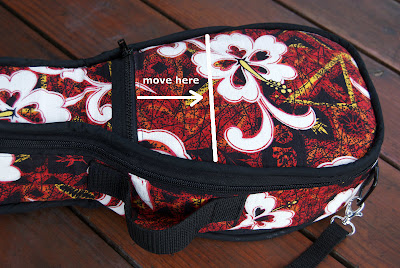 Next time I'll buy cording instead of making it. I may skip the stabilizer/interfacing combination, too. In the end, it just seemed like a headache to have to sew around. I didn't find this to be so with the trapezoidal shape of Weekender, but it was a bear trying to follow these tighter curves. I'd rather just stitch around the cording and insert a piece of plastic, as I ended up doing with this one, anyway.

Finally, the next bag will be sewn on an old Singer. I used the Pfaff because it was already set up from another project, but I don't like its zipper foot as much. The Singer zipper foot can sew right up close, whereas the Pfaff's doesn't seem as well designed to me, with a wider distance from the needle to the edge of the foot.
So that's the first attempt at an ukulele bag. It's funky—that's the nicest way I can put it—but at least it cost me nearly nothing, as all the fabric and hardware was in my stash or recycled from other pieces. I think the foam, plastic and bias tape cost a total of about $5. And now I can take the Gaspar to the Reno Uke Fest. 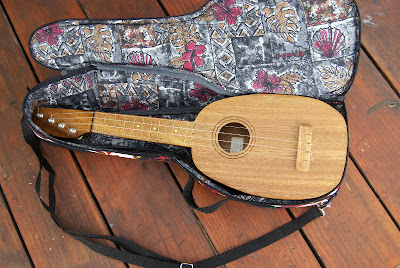 Still...I hope the next ukulele bag turns out better than this one. If you've made one of your own and/or have ideas on how this one could be improved, I would really love to hear from you.

As the boys get older, we continue to look for ways to spend time together as a family. It's a continually changing gig, always dependent on their ages and interests; but day trips are usually a good bet. Seems everyone likes to go and see something new.

Last year I purchased what I thought would be a fun way to get us out of town: a Living Social deal for a Segway tour of San Francisco. Busy weekends and bad weather prevented us from booking it until last Friday, a day that was forecast first for rain, then for clouds—but which turned out to be as clear and lovely as any day in the city can be.

Learning to ride is surprisingly easy. It's the most intuitive machine I've ever been on. Lean forward, and you roll. Lean back, and you stop. Keep leaning back, and your machine goes backwards. The Segway almost feels like an extension of your body after awhile.

But let's face it: there's no way to ride these things and not look like a big dork, as the writers of Arrested Development well know. 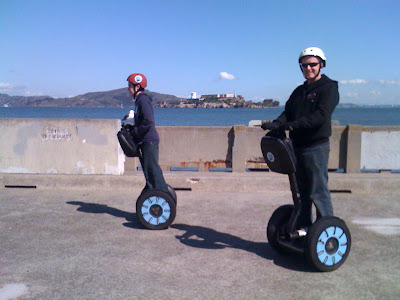 Still, it was great fun. We rode around the north end of the city: Municipal Pier, Cow Hollow, the Marina District, the Palace of Fine Arts. 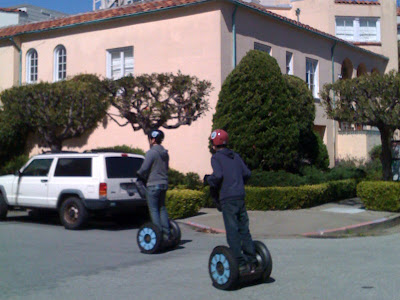 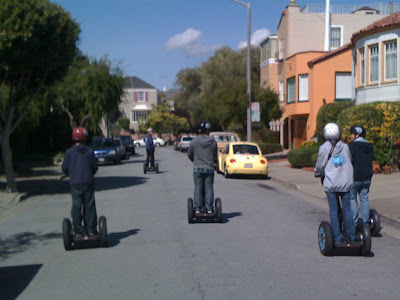 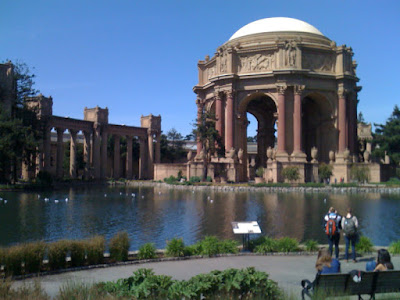 Near the St. Francis Yacht Club we had a beautiful, fogless view of the Golden Gate Bridge: 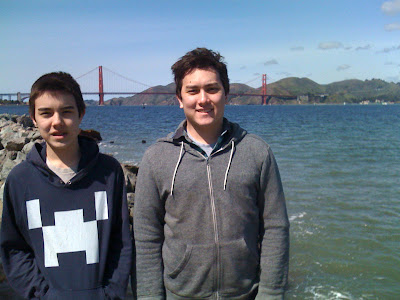 Along the way, as with any good tour, we saw and learned things that were new to all of us: The Heritage, a retirement home designed by Julia Morgan; the origin of the term "sugar daddy" in Alma Spreckels' pet name for her much older sugar heir husband; and many stories about the San Francisco World's Fair of 1915, for which much of the land in the Marina was reclaimed. (Side note: it was at the Hawaii Pavilion at this fair where the ukulele was introduced to Americans at large, setting off the first great ukulele craze.)

After the 3-hour tour (cue theme to Gilligan's Island), we turned around to get C to his band's gig that evening. But we all agreed that we would try to take another segway tour as soon as possible.

Do you have any favorite day trips?

Evening Three. The good news is that you will essentially have done all the steps that are involved in making the lining. It uses the same pattern and procedure as the outer shell.


But you may want to add interior pockets to the main panels, so do that before sewing all the panels together. My laptop pocket was made like the main exterior pockets, but sized to the height of the laptop for additional security. 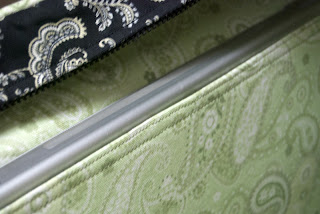 My zippered pocket, as mentioned in part 1, was made using this tutorial.
I had forgotten to pick up template plastic for the false bottom, so substituted a piece of lawn sign. 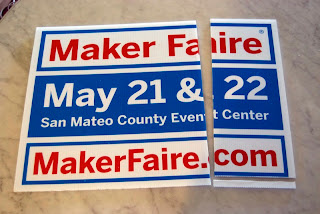 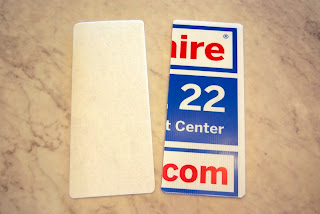 This worked so well that I am now always looking for discarded lawn signs as lightweight, water resistant reinforcement.


I really enjoyed making the Weekender. It was laid out so thoroughly that a novice seamstress could get through the directions, simply following it step-by-step.


My final notes:
My own minor modifications have all been noted before, but here they are again: 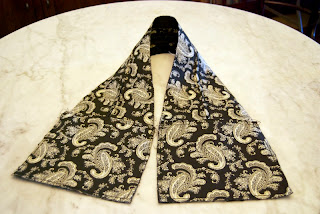 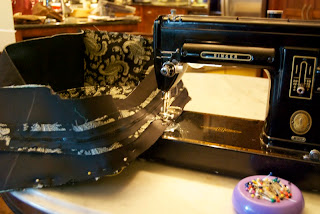 If you plan to add feet, do so now. The shell of the bag is now complete, and all that is left is sewing and attaching the lining.
Posted by unschool at 5:55 PM No comments:

The Weekender Travel Bag pattern is detailed and very clear. I can't imagine you will go wrong if you are careful in following it. Myself, I just noticed a big black ribbon across the top with advice to "...read through all of the instructions before you get started on your project. Be sure to pre-wash and press all of your fabric..." Oops.

But pre-reading (in addition to pre-washing) is a good idea. In particular, reading through the pattern is helpful in gathering supplies. As others have noted, one only needs 4 pieces of cording, not 5 continuous yards. And as the cording along the pockets runs straight, it can be covered in fabric cut with the grain instead of on the bias. I did this and was able to stretch my fabric, as I did not have quite enough. You can see below how much I had to piece fabric to get a bias strip. The two straight pieces sit beneath the bias strip. 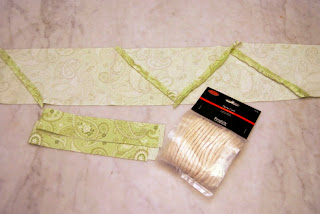 One reason I was tight on fabric is that I added an inch in length to the bag. I wanted to be able to slip my laptop inside, and the extra inch made that possible.


The other reason was a cutting mistake. Because of the way the pattern was folded to fit inside its cover, I inadvertently used it as the fold line even though the actual fold line is very clearly and heavily marked. So my advice, if you are careless like I am, is to tape the non-functional crease straight as I finally did, below. 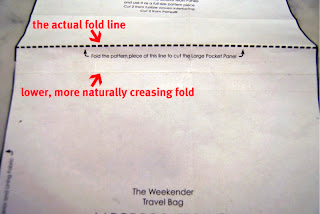 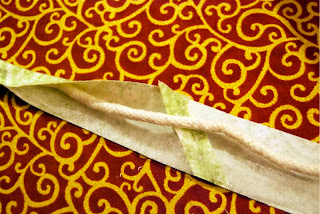 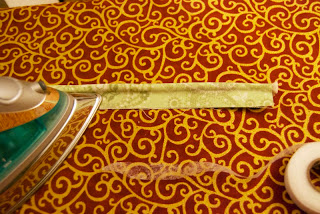 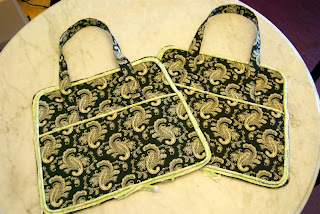 This first evening ended with the two main panels complete.

Posted by unschool at 5:55 PM No comments: 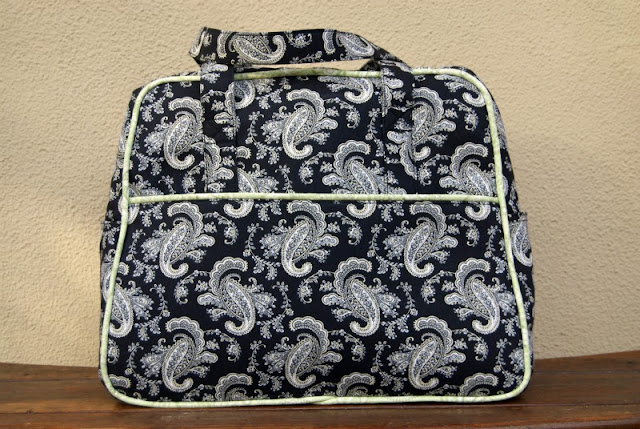 I was at first turned off by complaints about the pattern, the difficulty and the sheer number of hours that making the Weekender required. But slowly I became intrigued by just how many people had taken the time to log their experiences making it. It amounted to a huge body of collective experience: what worked, what to avoid, tips and shortcuts and additions. How could I not use such a reference?

And once I did, how could I not add to it?

So here is Part 1 of my Amy Butler Weekender experience: namely, a summary of the best information I could find in reading through the blog posts. 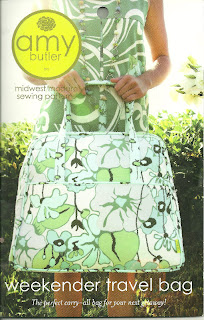 Some of the blog posts I found helpful or inspiring in some way (in Fall 2011):

http://mylilsliceofpie.blogspot.com/2008/05/hallelujah-its-done.html
be sure to check out her series of blog posts, Days 1-5, in April 2008

http://jenandfranz.blogspot.com/search/label/Amy%20Butler%20Weekender%20Bag
this blog included the single most helpful tip I found, which was to make the cording with stitch witchery

http://beezekneesfashions.blogspot.com/search/label/Amy%20Butler%20Weekender%20Travel%20Bag
two more additions which I used: magnetic clasps on the outer pockets, and feet on the bottom

http://needlebook.blogspot.com/2006/07/weekender-sneak-peek.html
the above blogger's first Weekender

http://www.elliphantom.com/completed_in_2006/weekender_travel_bag/
these photos show why it's worth taking time to match the print on the outer pocket to the main panel

http://www.flickr.com/search/?q=amy+butler+weekender&s=rec
I used a flickr search to view different color and print choices. Conclusion: the bag looks great in almost any combination

http://www.amyalamode.com/blog/2008/09/14/second-times-a-charm-orchristmas-in-september/
includes a link to a tutorial for making a handle grip

http://hiuma.blogspot.com/2008/10/first-big-project-weekender-bag.html
I loved that she used her treadle machine to sew the heavy layers
she also mentions, as do others, that you need less cording than is called for

http://craftoholic.blogspot.com/2006/05/my-weekender-bag.html
although I had every intention of choosing a large, colorful floral print for my bag, I ended up with the same colors as this woman's beautiful bag & can't help but wonder if I was influenced by her striking photos

http://knitlint.wordpress.com/2007/07/14/finished-object-amy-butler-weekender-bag/
I love that she documented how much she was able to fit into the finished bag—including her sewing machine!

http://www.stitchesandscissors.com/2011/10/my-weekender.html
used manufactured cording to save time, lengthened & widened the handles, & added a secret zippered pocket to outside pocket


One of these days, I'll move from my ukulele kick to something else, but I love this video for the sheer joy it captures. I also love the way all those lampshades look onstage, and the fact that they managed to get a full opera house to do the wave.

new ukulele group in our town 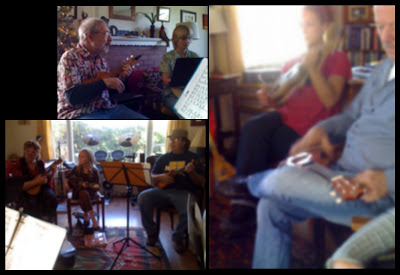 While shopping for C's ukulele, I spotted a notice in the music store about a new ukulele group starting up. Today 11 of us met for the first time. We were young and old, male and female, novices and longtime players. Should be fun.
Posted by unschool at 11:19 PM No comments: