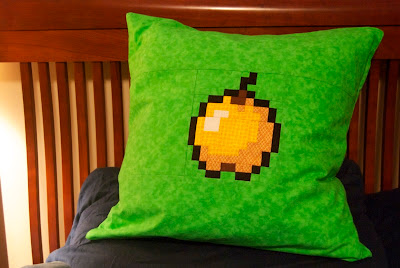 Here's a quick rainy day project I did for S, who loves a game called Minecraft.

We were looking at objects in the game and came across the Golden Apple. S remarked that it was a very rare but good find, as it restores all your health.

Doesn't that sound like something from a fairy tale? Find the Golden Apple, and all will be restored! I envisioned a little quilt block in the shape of a Golden Apple, something an ailing child could lie upon to feel better.

[Note to self: next time, learn about the game before making fairy tale assumptions. Partway through the pillow, I casually asked S, "Why would you need your health restored in a game?" He looked at me incredulously and said, in a tone one might use to explain why we wear coats in winter: "ZOMBIES, Mom."]

I thought this project might be useful to someone else who might also want to create a quilt block from a simple, pixelated icon. So here's how the Golden Apple was pieced.

I started by enlarging the icon to a size I could work with, like so: 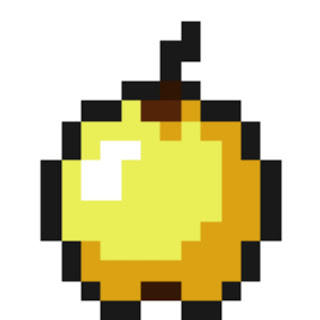 This is how I diagrammed it. (Sorry about the sloppiness and water drops. It wasn't my intention to blog this when I started.) The block is divided into 6 rows, each row the height of its largest component. I changed how I pieced it as I went along. All that really matters is that it be divided into rows which are sewn together afterwards. 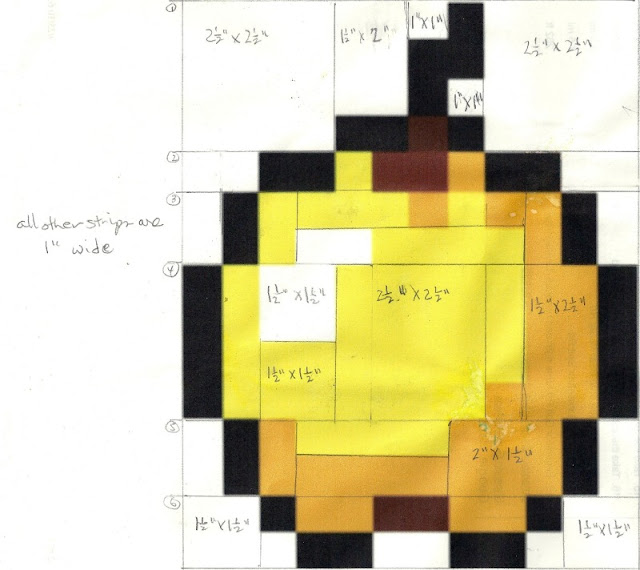 Here is an example of how Row 4 would be cut and pieced.
Notice how much it has shrunk in width. Six seams means it was diminished by 3" (1/4" on each fabric edge, or 1/2" per seam).

With each row in place, it soon looked like an apple, albeit a little elongated due to seam allowances not yet sewn. 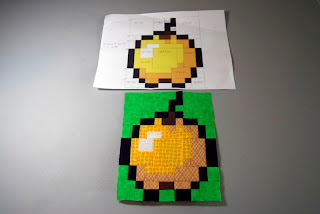 A few borders, and it became a pillow front: 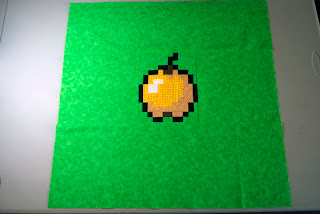 Having those narrow 1/4" seams rubbing against the pillow made me a little uneasy, so I cut a backing of muslin to the size of the pillow front and machine quilted around the black outline. You could put a piece of thin batting in between the pillow front and the backing. You could also quilt inside the apple. But without some quilting, it's likely to fall apart over the course of several washings. 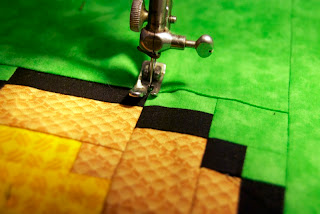 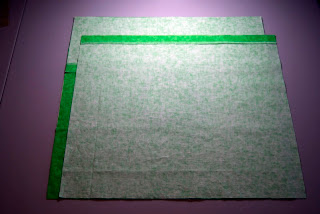 A quick stitch around the entire perimeter, turn it right side out, and it can be filled with an inexpensive pillow form from Ikea. S can now use it in event of the zombie apocalypse. 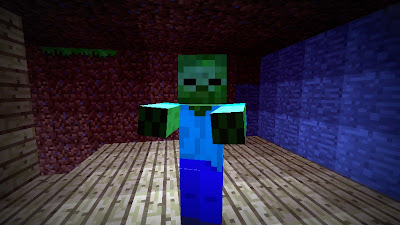