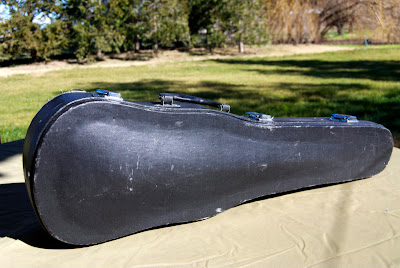 Once the Grizzly was made, it needed a case. My first plan was to try and revise the Gaspar gig bag, but then I lucked into this old violin case on freecycle. It turned out to be a perfect fit for a soprano ukulele.

As with the Grizzly, my documentation is spotty; but it's a fairly straightforward conversion. The old lining comes out and a fitted, padded lining is glued in its place. I used wood glue to attach fabric to plywood, but Super 77 made a smoother, stronger adhesion whenever foam was involved.

Some notes if you make your own version: 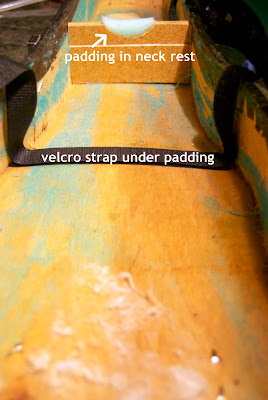 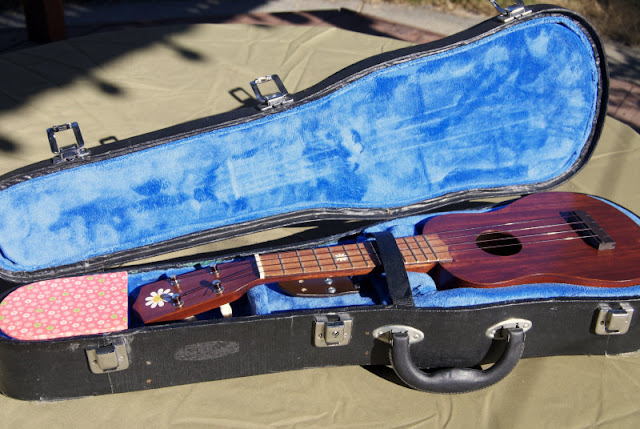 If you do make your own case, please consider linking to it in the comments below. I'd love to see other designs and ideas.

In other ukulele news, my ukulele group has grown over the last year, so I started a new blog for us here. If you enjoy uke talk, I hope you'll visit.


In December 2011 I had just begun playing uke and was also home with a nasty cough. The two converged together into a rush of web browsing, and eventually I came across this diy ukulele kit, on sale at a price that was far lower than the cheapest starter instrument. Of course I ordered one.


Basic as it was, it sat around for many months before I dared to try and assemble it. I don't know much about wood, and it felt incredibly daunting to turn pieces of wood—even pieces that were precut and partially assembled—into a playable instrument.


But I eventually started, and soon after I ran into David Iriguchi of Iriguchi Ukuleles. I confessed with much embarrassment that I was starting a kit. Way back in March at the Reno Ukulele Festival, David's concert keystone uke was the first to make me realize what a truly fine instrument sounded like. So it felt akin to telling a sculptor I was going to make a dog out of Playdoh.


But David was characteristically kind and encouraging. He advised looking up other people's chronicles of their kit builds, and said not to worry too much about precision because it would probably turn out okay.

The instructions directed that the fretboard be put on before staining, but the bridge put on after. If there's logic to this, I don't understand it. I thought afterward that I would have rather put the fretboard on after staining, as it was hard to tape up the bottom curved edges well.


The only modification I made was adding a sound port to give me some direct sound feedback. This is a feature that many of David's ukes have, and I really liked it when I tried them last year.


What's not documented here is all the sanding and finishing. I had thought it would end with the fine grit sandpaper, but then I read about filling the wood grain and sanding that down, too. Then there was staining, cleaning up the leaked areas, drying, and finally spraying several light coats of lacquer.


It was rather tedious toward the end, but worth it for the smooth finish on the body. The stain's not perfectly uneven, but in a way that I can live with. Overall, I'm happy enough with how it turned out.


The kit is branded with the Grizzly name. I wanted to put a bear sticker on the headstock, but couldn't find anything suitable. What I did find was a sheet of daisy stickers. It was S's idea to put a daisy in the sound hole, as well. Now it feels a little like overkill, so I'll probably remove the stickers eventually. Meanwhile, we've gone from calling it the Grizzly to calling her Daisy.

I can't finish this post without mentioning DH's huge contribution to it. It initially sounded a little thunky to me, so he used a tuner and some filing instruments to bring it to a better intonation. This is not something I would have had either the knowledge, patience or courage to try myself; but I'm very grateful that he did. I sold the Dolphin in October, so this is now the main soprano I reach for.

Every time I play it, I remember how I was afraid to start, and how it turned out okay.

How many ways can one dork out to Downton Abbey? Season 3 is just about to premiere in the States, so we are learning that there are many, many ways indeed.

There's the Downton Abbey cocktail series at The Kitchn (the Bittersweet Mr. Bates came out this morning).

And the Agent Gates graphic novel.

There are old favorites like Downton Abbey portrayed by dogs, the Fresh Prince of Downton Abbey, Downton Sixbey and Uptown Downstairs Abbey.

And then there are quizzes, quizzes galore. Google "Downton Abbey quiz" and see how many of the 1.5 million results you get through.

But yes, I made one, too. The show just calls out for a trivia quiz, what with all the richness of detail in the costumes, setting and storyline. I was scribbling down interesting facts as we watched it through once, then started to formalize it for team trivia when it was rerun. As it turned out, we didn't end up playing this one at New Year's so I offer it here for a few series-besotted friends, and perhaps for you, as well.

1. What is the name of the real castle where Downton Abbey is filmed?

2. Who is the first character Julian Fellowes wrote, after reading a history set in the 1880s and 90s?

3. In which month and year does Season 1 begin?

4. Who is the first character we see in the first episode of the series?

5. What is the name of the pub in town where Carson meets the other Charlie?

6. Who invented the swivel chair?

7. Which Downton Abbey actor shares the same name as a former US President?

8. Where does the first scene of Season 2 take place?

9. What is the name, and breed, of Robert's beloved dog?

Posted by unschool at 3:30 PM No comments: 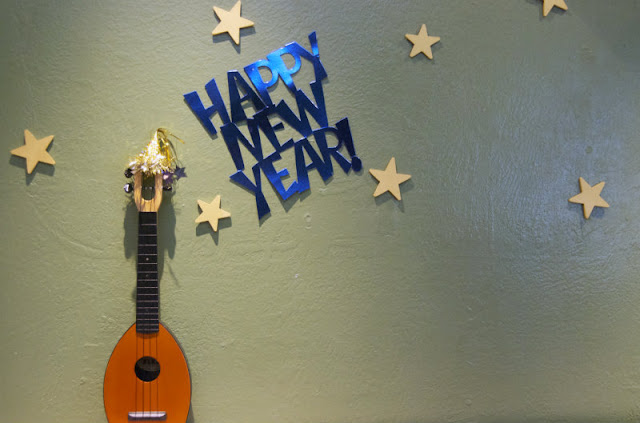 This blog needs a new header, perhaps a new name. It needs a lot of things, but for today I'm just going to sit and play my Flea, still in its party hat from last night.

We had our usual New Year's Eve party. It has changed shape greatly over the years, from the first year playing board games with friends all night long to last night's more lively rounds of team trivia and group singing. This morning I looked at the piece of butcher paper we taped to the wall. 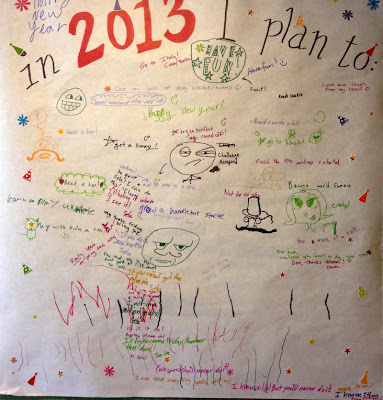 The kids went to town with it, but amongst all the silliness are some genuine resolutions: a couple about learning ukulele (we had all the ukes out last night, just as we did last year when the idea of an uke group first hatched), others about pets, reading, sports goals, travel and having fun. And one very sweet: "Not be so shy." I have no idea who wrote any of them, although I have guesses at a few.

My resolutions are not on the paper, and I can't think of any I would write. When I start the New Year with friends, it's hard to want to change much. Instead, what I want is to remember to be grateful for the days I have and the people around me. With any success at that, I believe it could be a very good year indeed. I hope yours is, too.