This is what happens when your kids get older: one year they suddenly don't want to go to the pumpkin patch, not even to run through the corn maze, not even if we were to call up friends. It broke my heart.


We got all the way to Halloween Day without a pumpkin in the house, except for a few feeble little things we grew over summer. It wouldn't have mattered, except a jack o'lantern is required in our neighborhood if you are passing out treats. DH and I figured we'd pick something up when we went out for groceries. But there were none, no pumpkins at all.


The did have...watermelons? In October? And I thought a watermelon might be easier to carve than a pumpkin, anyway, so we brought one home. I've never been good at carving pumpkins, but a watermelon seemed like fun. 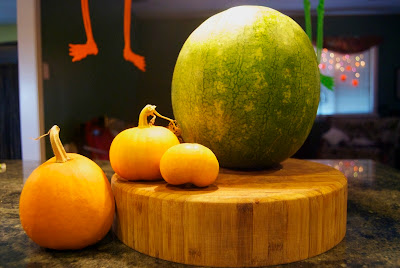 It was pretty easy to slice off the top and hollow it out. At first I thought I'd go all the way to the white rind, but then realized the red flesh might be useful. So a tiny, last-minute layer of red is in there, too. 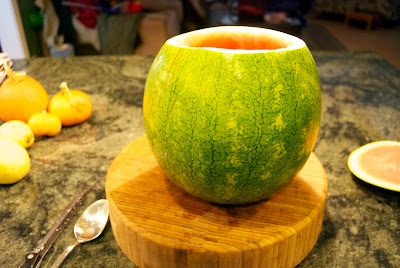 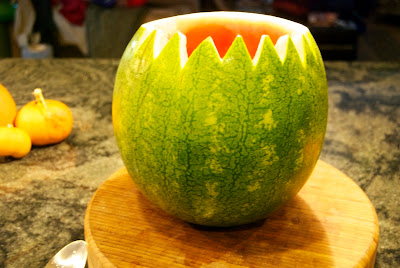 And here's where having a bit of red added some nice, bloodshot color to the eyes: 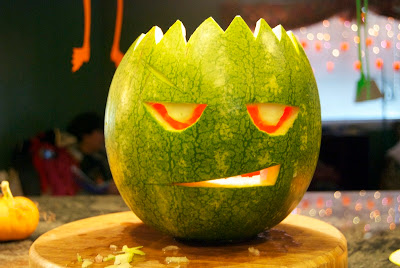 A little working of the scar, some neck plugs, and the Frank O' Melon is born: 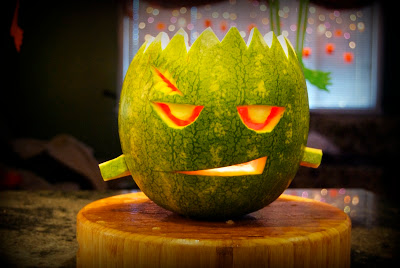 I might look for watermelons next year, too.
Posted by unschool at 5:08 PM 3 comments:

Email ThisBlogThis!Share to TwitterShare to FacebookShare to Pinterest
Labels: fall 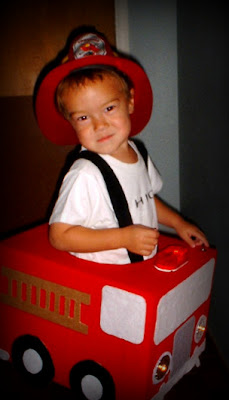 Halloween feels most...Halloweenlike...(by which I mean most like Halloween as I remember it, well before the advent of the sexy costume and the expensive lawn decor) when the kids have some involvement in creating their costumes. We have had years when we bought particular costumes or props, but it's more fun to make something—and most fun when the maker is also the costume wearer.

As soon as they were able to, I used to ask the kids to draw a picture of the costumes they envisioned. From there we'd figure out how to put them together; there was always at least one step the kids could do themselves. The point wasn't to approximate anything manufactured or even Martha Stewart-style homemade, but simply to learn how to actualize an idea. Even as a tot S could tell us that he wanted to be a fire truck, not a fireman, and that the truck should have wheels and lights (above).

This process paid off the year C made a wraith costume, because I had no idea what a wraith was and was unable to help him work it out. Undeterred, he designed a simple robe pattern from newspaper, sewed it together, and even fashioned a funky hood using wire and a black stocking to obscure his face. I can see by the date on the photo that he was 11, the same age S is this year. 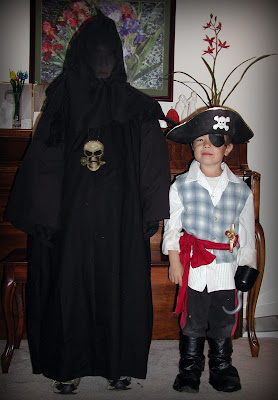 This year S decided he wanted to be an iPhone. He knew exactly how he was going to make the costume, too, so tore ahead with his project, accepting only minimal help. Apparently in our family 11 is the age at which costuming confidence really takes off.

Step One involved finding some stiff-but-lightweight board material (in this case, foamcore from OfficeMax), cutting off the corners, and spray painting it black. 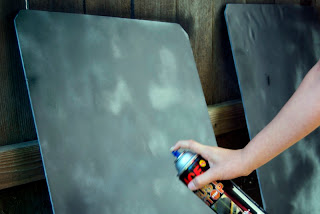 Next he located an Apple logo, printed the outline, cut it out, and glued it to one of the boards. I thought it might be the perfect time to explain ratios and proportions...but it wasn't. S wanted it done quickly and preferred to eyeball everything. He said, "It's a costume, Mom! It's for one night. It'll look good enough." And he was right. 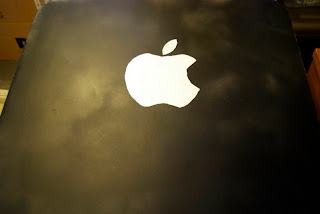 We lucked into finding a set of app images ready to print, but it would have been only another few steps to create our own using a screen shot of the phone and a postermaking site. These were arranged and glued to the front boardpiece. 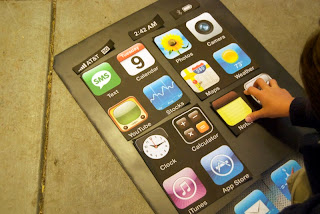 The costume was finished with shiny duct tape and a recent discovery: metal strapping. Metal strapping is thin, flexible, galvanized steel, pre-punched with two-different sized holes into which one can insert nails, screws or bolts. A roll costs a dollar or so. How many ways will we find to use this, I wonder? 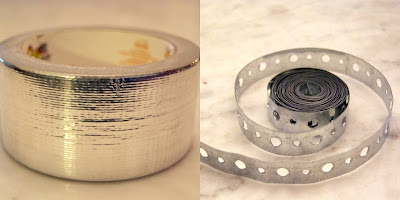 The duct tape became the edge of the phone— 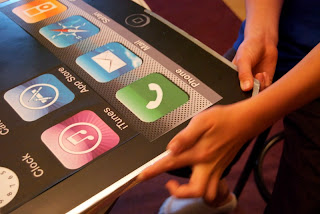 —and the strapping shaped into a shoulder harness from which to hang it all. 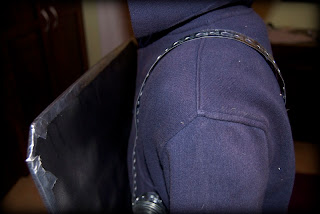 Voila! A sandwich-board iPhone, visualized and largely created by S himself. It was quick and inexpensive to make, should hold up through the night of Halloween unless there's rain and most importantly, it turned out just like its creator wanted it to. Nothing better than that. 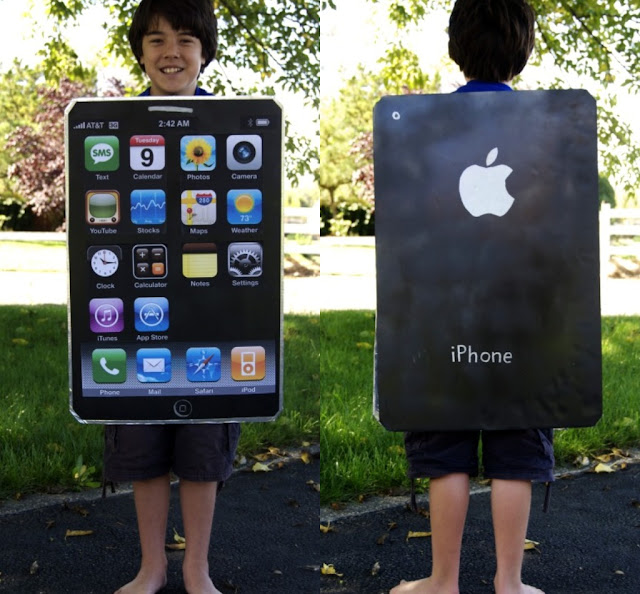 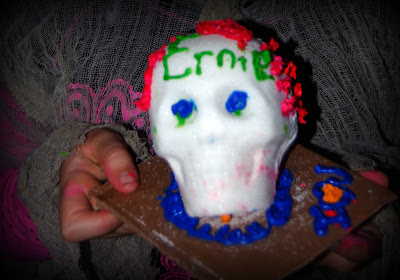 A few years ago we were lucky enough to have a native Spanish-speaking university student come to the house to teach the kids language and culture. That year we made sugar skulls for the first time under Lizette's helpful tutoring.


We repeated the project last year with S and some of his friends. Although I took photos, I had no blog at the time so am posting them now in time for Dia de los Muertos, which is celebrated on November 1st and 2nd.


We live in Central California, and our local food co-op sells sugar skull molds every year. They come in a variety of sizes and styles, but it seemed to me that it would be easiest for kids to decorate the larger skulls so that is what we have used.


You can also purchase molds online here. This site is an incredible resource, and most of what I will be posting was learned as a result of their own clear instructions.


Ten lbs of sugar will make 10 large skulls. Plan on a couple of extras, because the skulls can crack and break. Trust me: you'll want to be able to pull out a spare immediately if this should occur!


To the sugar, add 1/2 cup meringue powder (available in the baking section of your grocery or hobby store) and mix thoroughly. Sprinkle 7 tablespoons of water over this, and blend until it has the texture of soft beach sand. 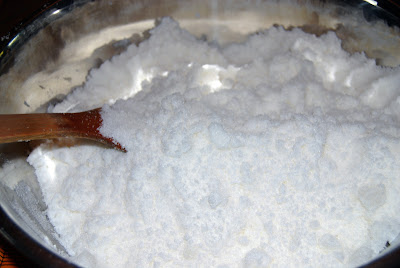 Fill the molds firmly, so there are no air pockets which could cause the skull to collapse later. Tamp it down a little at a time with a butter knife or something similar. 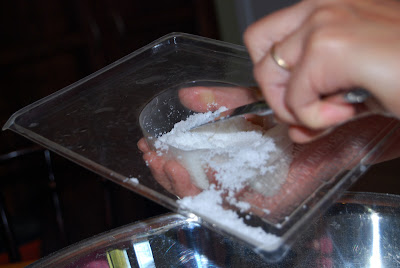 Unmold onto a piece of cardboard. This is where you can first get some problems such as...cracking. 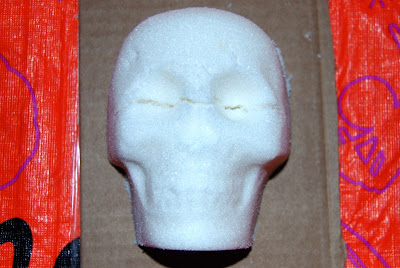 This will have to be put back into the bowl and packed all over again. But better now than later, when it is already too hard to remold.


This large skull mold had two parts: a face and an occiput. Both sides need to dry overnight so they are hard enough to hold in your hands and scoop out the centers. Then you'll turn them over and dry overnight once more. 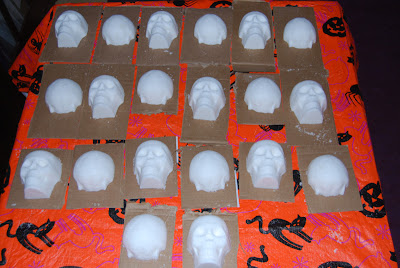 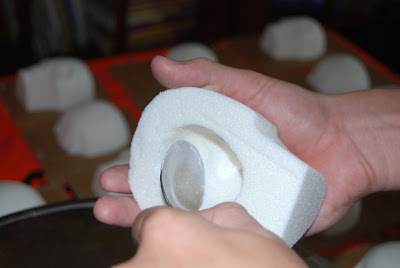 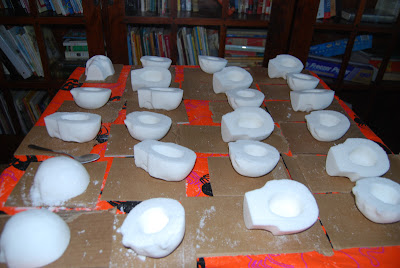 The two halves are glued together with royal icing: combine 2/3 cup water, 1/2 cup meringue powder and a 2-lb box of powdered (confectioners) sugar in a bowl and beat with an electric mixer until icing becomes glossy and holds a stiff peak when the beaters are raised.


Using an icing bag and tip or a baggie with one corner snipped off, glue the two halves of the skull together. Now your skull looks something like this: 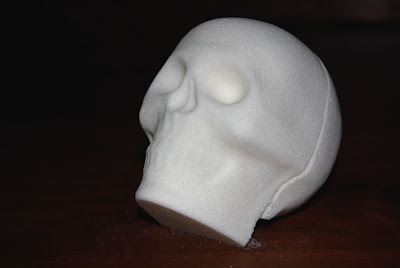 More royal icing, tinted with icing gel, is used to decorate the skulls. The name of the deceased loved one you are commemorating is written across the forehead or on a small piece of colored foil and pasted to the forehead with icing. Although we provided the kids with foil last year, they seemed to prefer the icing (!). 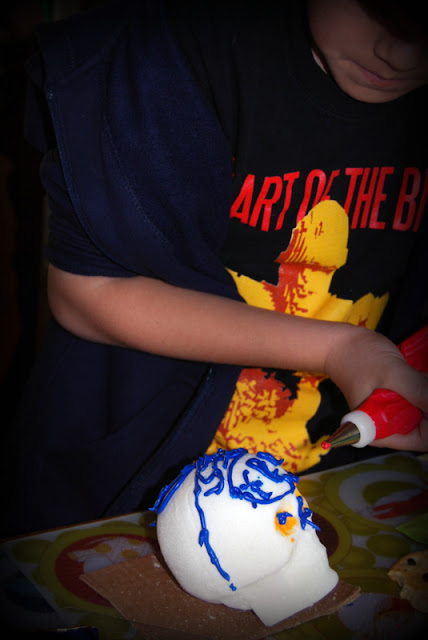 Dia de los Muertos reminds me a lot of Obon, a festival celebrated both in Japan, where my husband and I lived for several years, and in Hawaii, where my mom grew up. It also reminds me of the Hungry Ghost Festival, which we loved seeing in Singapore, birthplace of my father and another place we lived before children.


There is something especially rich about festivals which place us squarely in the continuum of life, reminding us of those who lived and died before and played a part in who we are; and which acknowledge the existence of our dead among us even after their corporeal selves have passed.


That said, it struck me that most of the children last year, even if they had lost a relative in their lifetime, chose to make their skulls tributes to pets. They all turned out beautifully. 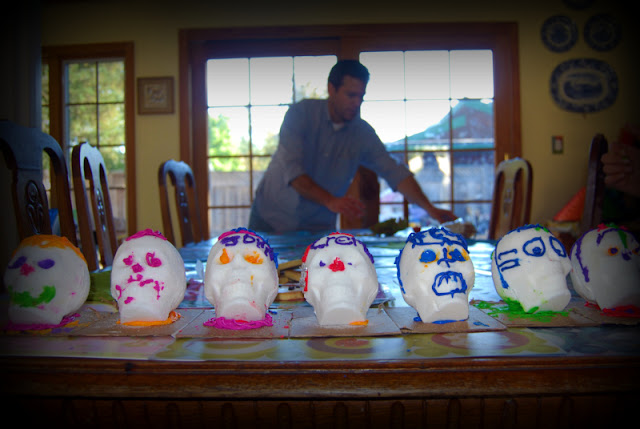