Sometimes projects skate along just as you imagined them, and sometimes—most times, I've come to believe—the project seems to grow in both breadth and depth the farther you get into it.

Last weekend DH and I decided on a whim to visit a flea market. We never do this, so it was extra fun browsing tables full of old dishes, board games, car parts and aloha shirts. On our way out I spotted this pair of giant scissors and bought them on a whim. They were old and rusty, but they were the largest pair of scissors I had ever seen. I wondered if they might be brought back to working condition. For $2, it seemed worth a shot. 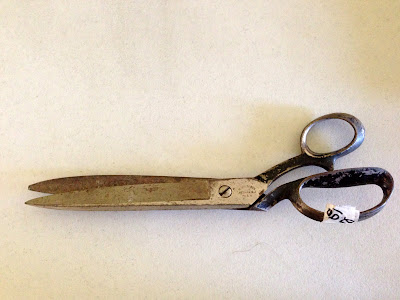 A little steel wool, and some marks began to emerge:
And on the reverse...

I think that's what it reads. Not so sure about the last letter of Detme-.

A web search on R. Heinisch mentions production between 1835-1914, when the company was bought by Wiss; and a glance at a 1915 Wiss catalog confirms that the Heinisch name was not retained. These scissors are around 100 years old.

After I had done all I could with the steel wool and chrome polish, I took them to a sewing machine repairman to be sharpened. His charge was only $9, but the scissors turned out to be for paper, not cloth. The difference, apparently, is in the angle of the bevel: dressmaking shears are angled at 30-45 degrees, while paper scissors are angled at 15 degrees. This is why one never cuts fabric with paper scissors and vice versa. Who knew?

In any case, it was a straightforward little project, just a bit of elbow grease and a visit to the repairman. Now what will I do with this humongous pair of office snips (shown here with our regular scissors for comparison)? 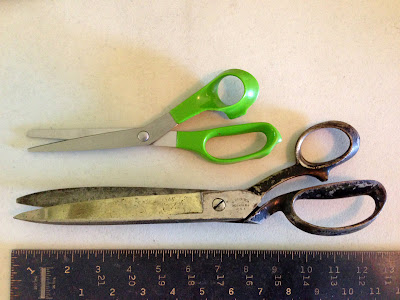 Another Freecycle find. I saw the listing once and ignored it; but when it was relisted, I couldn't resist saving it from the dump. The woman who offered it assured us that surface rust aside, it worked just fine. 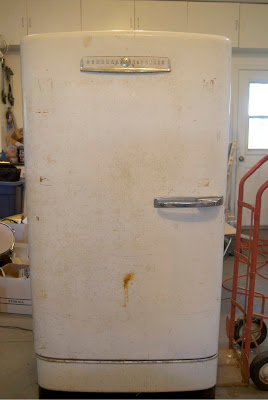 Indeed, the inside was quite clean: 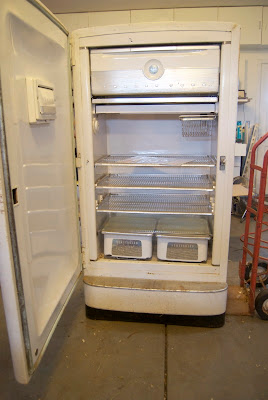 I assumed I could sand down the rust and give it a new coat of paint; and my first efforts seemed to bear this out (color differences are due to photographing before and after photos at different times of day in a poorly lit garage): 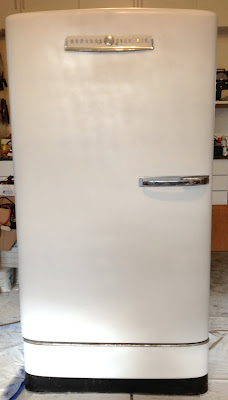 DH replaced the frayed power cord and I figured a good wipedown of the inside would do the trick.

Then I got to the gasket.